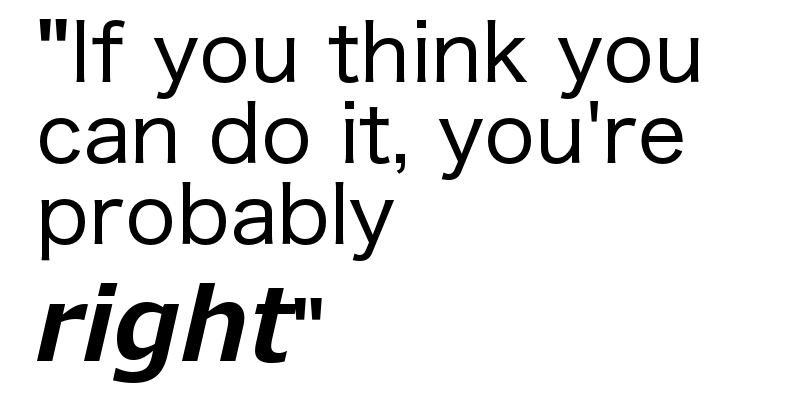 One of the most memorable phrases that I have ever heard was given to me during secondary school. I was never ‘top of the class’, but I was part of the year group that was selected for this ‘aiming higher’ course. Basically, those that were above average achievers with potential, but not ‘top of the class’ were chosen to attend a series of classes about how to achieve more. These were held in the school or at University of South Wales, Caerleon campus, and the purpose was to motivate us to try harder, achieve more etc, by teaching us how to revise more efficiently, how to use different tools to reach our potential and so on.

Some would think this is really boring and useless, but I found it particularly useful. At the time (2004), there were 15 members of the EU, and I can still tell you who they were in alphabetical order forwards and backwards, and count to ten in Japanese. These were taught to us using techniques like visual association and memory accession. These techniques I still use today, to member lists of things or particularly complex things, and sure it isn’t for everyone, but it works for me. Mind maps, for example, I find of no use to me, but others swear by them .Each to their own, right!?

Anyway, back at school, one Mr Alan Bootle, gave us a lesson on how to revise. I hadn’t really had an awful lot of face to face teaching by him, but knew who he was and what he did, an I assume he didn’t know anything about me either!. In this lesson, Mr Bootle told us that he didn’t do particularly well in secondary school, but then discovered how to learn and retain information, and how he ended up getting a first class degree at university. He went through a range of techniques and gave us hints and tips, which were very useful indeed, and not only that, the motivation and passion he showed us really rubbed off on me, and from that point I held him in really high regard, and with a great deal of respect (more so than I had before).

One of the things he talked to us about was believing in yourself. Having confidence in your own ability and belief that you are better than you think you are. He said to us, if you think you can do it, you’re probably right, and it is this positivity that has really stuck with me since then., and is a motto that I live by for everything. It translates really well in every aspect of life – for me, doing this PhD is a hard slog, and sure, not everything works, but maintaining positivity, no matter how hard it gets sometimes, is really important. There is light at the end of the tunnel, and you will get there, because ‘if you think you can do it, you probably can 🙂

Postdoctoral Research Associate interested in Candida, oral biofilms, virulence, microbial interactions, host cell responses to infections and tissue engineering. Father to two amazing boys, and husband to an incredible wife. Hobbies include writing, listening to and performing music with my band and spending time with the family.

This site uses Akismet to reduce spam. Learn how your comment data is processed.